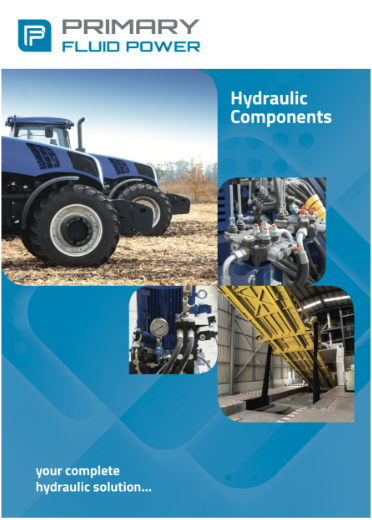 Please download our digital brochure to view the full range of products and services available from Primary Fluid Power.

The History of Hydraulic Systems

This article from Primary Fluid Power gives you a timeline overview of how humanity has developed their ability to control and manipulate fluids to drive industrial success.

If you’re one to scroll through Facebook you may have seen those viral videos from time to time: Random items placed under a hydraulic press until they crumble, crush or explode!

Of course, hydraulics serve far more of a purpose in 2021 than simple social media entertainment, but how has the technology evolved to a point where we are able to obliterate household items for pure enjoyment?

Be it in liquid state for contemporary hydraulic systems, or as a gas during the steam engine-powered industrial revolution – Humanity has always relied on water. It has always delivered, facilitating technological improvement across the ages.

What are hydraulic systems?

Hydraulic systems use liquids through pipes and channels to generate mechanical force or control. They are greatly important in engineering as they are capable of moving heavier loads, and provide a greater force than electrical, pneumatic or mechanical systems.

How the Egyptians used water

While it is difficult to confirm which period in history gave birth to early hydraulics, we can see evidence of ‘water power’ dating as far back as ancient Egypt

Settlements would be built around rivers for easy access to water, giving life to the civilisations that were based there. Agriculture in Egypt depended on the Nile waters and the annual, predictable floods that brought fertilising silt.

Through the process of basin irrigation, which allowed them to control the rise and fall of the river to best suit their agricultural needs, they constructed a network of banks parallel to the river, leading into basins. Sluices would direct floodwater into the basins where it would saturate the soil, the remaining water would be drained off to a nearby canal where farmers could plant crops.

It may not be truly representative of the hydraulic systems we know today, but it is one of the earliest known manipulations of fluid to serve an industrial purpose. We know you’re here to read about hydraulics though, so let us fast forward through time. 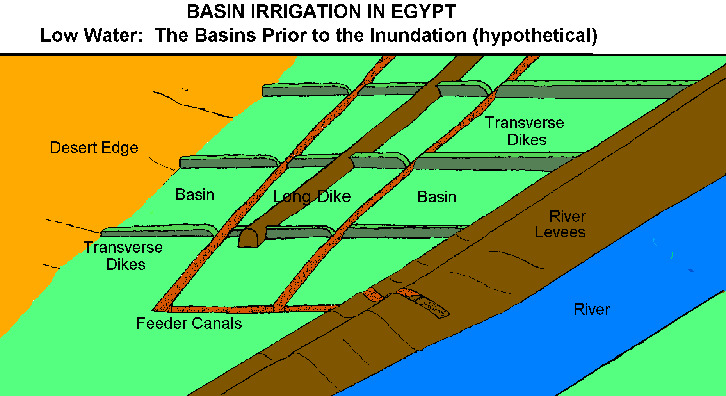 The development of the Ancient Greek water clock, called the clepsydra, began around the year 325 BCE. The only previous time mechanism was the sundial, which was proving problematic as it was only functional when the sun was present.

The clepsydra was made from stone, bowl-like in shape, and had a hole in the bottom to control a non-stop pressured water flow. The flowing water was caught in a similar, second vessel below. This vessel was introduced by Ctesibius to track time more accurately. With markings on the side representing hours, time was indicated by the level reached as the volume increased. Each notch indicated a new hour.

The impact that water clocks brought to the modern world was significant. Not only did they provide a measure to keep time in important proceedings like courts, debates and productions, but the more advanced water clock had a cultural impact unlike any development since. Time keeping has become the basis for modern culture, empowering the world to follow daily schedules. 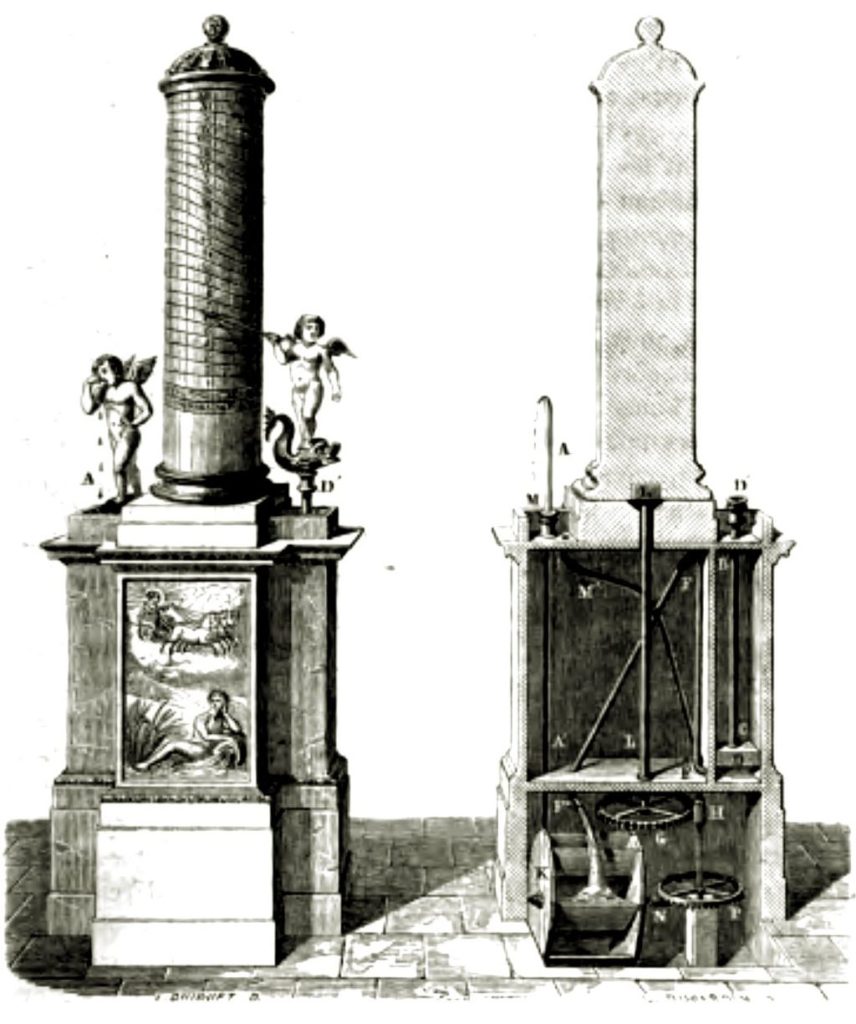 Flemish engineer Simon Stevin (1548-1620) was the first modern scientist to investigate the statics of fluids. He considered three vessels with the same base area, filled with liquid up to the same height. Clearly, the pressures at the bottoms of each vessel would be equal, and so the vertical force on the bottom of each tank would be the same.

The idea for hydraulic cylinders can be attributed to renowned French mathematician Blaise Pascal (1623-1662), who dedicated a large part of his mid-1600s studies to fluids, fluid pressure and vacuums.

Pascal’s research led to the discovery that fluids do not compress in the same way that air does, rather, if you put pressure on a fluid in one area, that pressure will transmit equally in all possible directions.

He imagined a liquid-filled bottle with an opening at the top. If 5 pounds of force was applied with a cork to the opening, then that same 5 pounds of force would be transmitted equally to every possible area of surface on the inside of the bottle. This is known as Pascal’s Law:

It would be over a century before this principle was used in a meaningful way, but it went on to provide the grounding for some of the most crucial hydraulic innovations in human history. It provided an extremely valuable principle for anything that works with fluid movement.

As a guiding principle and the basis for most modern hydraulic systems, it defined how energy is harnessed and led to the invention of the hydraulic press.

Pascal’s Law was put into motion with the dawn of the Industrial Revolution over 100 years or so later. English inventor and locksmith, Joseph Bramah (1748-1814), patented his “Hydrostatic Machine” in 1795.

Using Pascal’s law, Bramah took two liquid-filled cylinders of differing sizes and connected them by a pipe. When pressure was applied to the top of the smaller cylinder it would force the liquid to put a huge amount of pressure on the larger cylinder. Cylinders with matching pistons, sealed with leather and self-tightening collars, were introduced – Bramah had the basis of the first known hydraulic press.

Along with William George Armstrong, he can be considered one of the two fathers of hydraulic engineering. 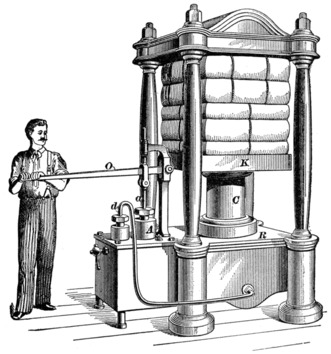 Rapid advancement in the 19th century

The 19th century brought about a rapid advancement of hydraulic systems and technologies.

William George Armstrong (1810-1900) experimented with hydraulics and developed the rotary engine, although there was no real fanfare for his invention at the time. Later, he went on to discover what we know as the Armstrong effect, whereby electric energy could be created from escaping, high pressure steam.

Armstrong used hydraulics to design a crane with a powerful reciprocating ram, using the technology to bipurpose the water supply of a town as a source of power – this led to a successful business in crane manufacturing.

Developed out of the “hushing” methods introduced by the Romans some millenia ago, hydraulic mining used high-pressure water jets to excavate rock, where previously the rock was either blown with dynamite, damaging the potential take, or chipped at with a pickaxe. This was a huge industrial development and pushed the California Gold Rush forward.

The machines, which were well over 15 feet in length, removed rock and sediment at such a rate that miners did not know what to do with the waste. With soil and rock often deposited into rivers and lakes, regulation in the USA and UK soon followed. Hydraulic mining techniques are still used to this day.

“Over the brink of Niagara Falls a million tonnes of water pour, and 212 feet below, the mighty torrent falls against the blades of huge turbines, creating horsepower to light 275 cities, towns and villages and run the motors of thousands of factories.”

As the 20th century washed in, so did new, varied uses for hydraulics as evidenced in Chevrolet’s 1936 short film: “Hydraulics”

Sure, the adaptability and flexibility of hydraulic power led to new products with smaller tubing and different actuator types, but it was also scaled up massively with the introduction of hydroelectric power plants across the western world.

Modern construction sites and packed full of hydraulic machinery and equipment like cranes, drills and presses. Construction vehicles also use pressurised fluid systems to achieve their purpose, too. Why? Because hydraulics have been proven to have a higher power density than electric powered motors.

Hydraulic engineering has allowed for the growth and development of better aerospace technology, with hydraulic systems powering many parts of a plane including the doors, steering and wing flaps.

Hydraulic systems have matured and developed over the generations but they have always, and will always be based on one natural law: you can’t compress a liquid together, or confine it to space that is smaller than the one it already occupies.

At Primary Fluid Power we house not only the complete fluid power components but also the spares and accessories to accompany them; meaning we can build and modify our products to suit your specifications, ready for next day delivery.

Learn more about us or get in touch with any queries. 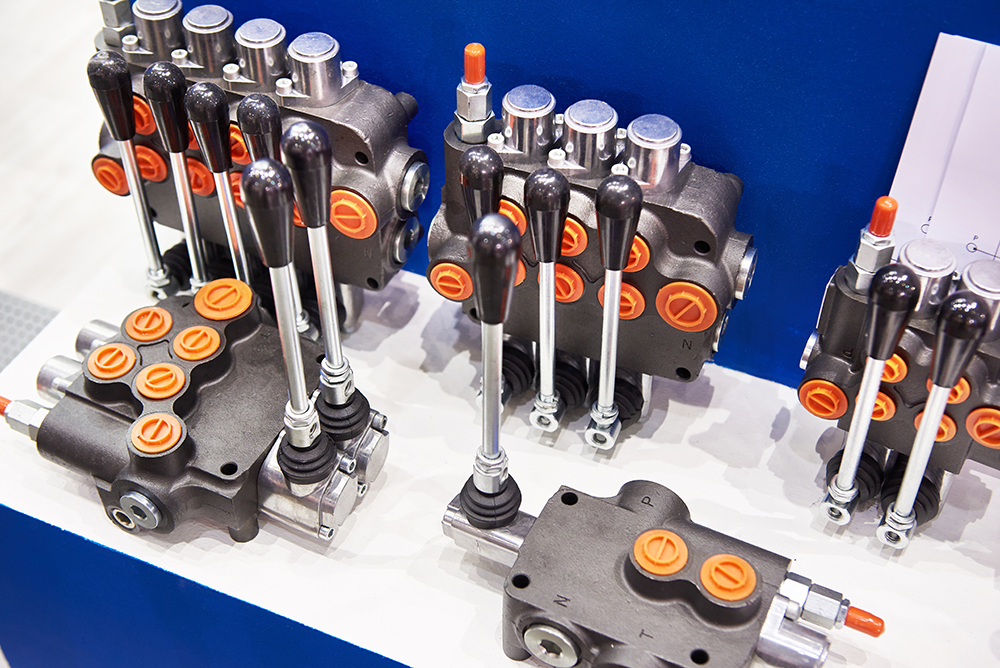 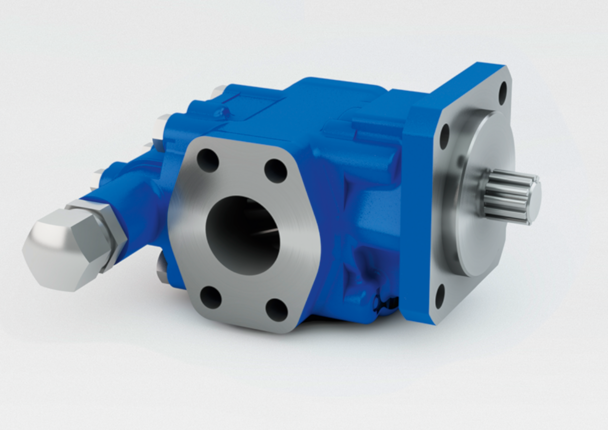 This article aims to provide guidance on building an effective hydraulic system, with advice on... 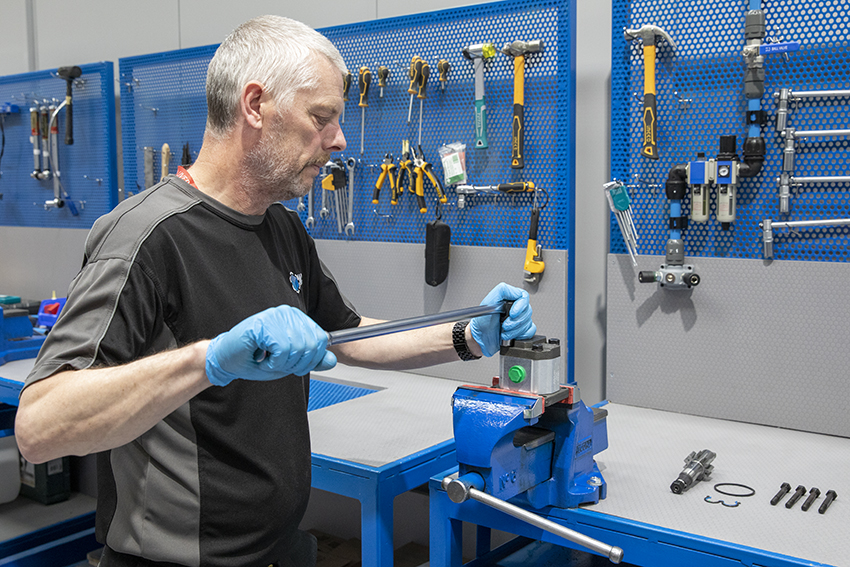 What does it mean when your hydraulic pump starts to 'whine'? This blog covers the...

Thank you for your enquiry. One of our sales team will be in contact shortly.

Thank you for your message. It has been sent.